Billy Gibbons, Dusty Hill and Frank Beard have been performing together as ZZ Top since 1969. The band was formed in Houston, Texas, with its roots firmly in the Blues. 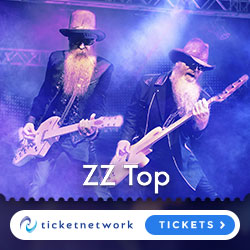 Billy Gibbons (guitars and lead vocals) is the acknowledged leader of the band, the main lyricist and musical arranger. Dusty Hill (bass, keyboards, lead vocals) and Frank Beard (percussion) provide a formidable rhythm section, one of the best in the business. For many years Hill and Gibbons’ trademark long beards made the band instantly recognizable, Frank Beard on the other hand usually only sports a moustache!

During 47 years of recording and touring the members of ZZ Top have absorbed and deployed influences as diverse as New Wave, Punk, Dance Rock and Boogie Blues Rock. Billy Gibbons’ lyrics re-work classic Blues themes; alcohol, sex, love, automobiles, the road and the American dream versus the reality. Often all of these are present in one song. Humour, innuendo and double entendre play their part too, from the early albums such as ‘Tres Hombres’ and ‘Deguello’ right up to 2012’s ‘La Futura’.

Gibbons, Hill and Beard have achieved both commercial and critical success during their extraordinary career as ZZ Top. Four of their studio albums have gained gold record status, three albums rank as platinum records and two are now multi-platinum success stories. ZZ Top was signed to Warner Bros. Records from 1979 until 1994, when the band moved to RCA Records.

ZZ Top’s 1983 album ‘Eliminator’ remains the group’s most commercially successful record, having sold over 10 million copies in the United States alone. Who can forget the brilliantly tongue in cheek videos produced for the classic ZZ Top hits ‘Gimme All Your Lovin ’, ‘Sharp Dressed Man’ and ‘Legs’? This was a band that understood the power of MTV and certainly knew how to “party”.

This band have toured worldwide for decades; for example the ‘Afterburner’ tour of 1986-7 consisted of five “legs” spread over North America, Europe, Asia and Oceania, with nearly 200 gigs played! ZZ Top rightly deserves its reputation as a “top” live act.

In the studio recordings of the 1990s, ZZ Top began to move away from the commercial, danceable rock tunes of ‘Eliminator’ and ‘Afterburner’, although these hits still featured prominently in their live shows. Billy Gibbons’ Blues guitar began to re-assert itself in albums such as ‘Mescalero’ (2003). ZZ Top was inducted into the Rock and Roll Hall of Fame in 2004 by rock legend Keith Richards of the Rolling Stones.

Throughout the 1990s and early 2000s a number of earlier ZZ Top albums were re-mastered and re-released as box sets of CDs. There was a greatest hits compilation ‘Rancho Texicano’ in 2006 and a 25th anniversary Collector’s Edition of the now “diamond-selling” album ‘Eliminator’ was released in 2008.

The year 2012 saw ZZ Top release a brand new studio album titled ‘La Futura’, produced by Rick Rubin. ‘La Futura’ marked a return to the band’s roots with thrashing guitar riffs, solid ZZ Top rhythms and gritty vocals. However there was also a nod to the Houston hip-hop scene with the track ‘I Gotsta Get Paid’. Overall ‘La Futura’ is a very satisfying album, a fine balance of all the qualities that have kept ZZ Top in the limelight for nearly five decades.

The ZZ Top ‘Hell Raiser’ tour of North America was amazing. Tickets sold out very quickly for various dates during November 2016 and also in February/ March 2017. But ZZ Top don’t take much time off they are always gigging. Don’t miss this great opportunity to enjoy one of America’s best live bands ever!
Susan Lomas, November 2016

Next: The Foo Fighters